This could be the greatest fossil rediscovery of all time
02 July 2018
|  Share: A scientific contribution by ALERT Life Sciences Computing
Ground breaking findings went unnoticed for over 140 years on the Mona Lisa of fossils – the Berlin specimen of Archaeopteryx –, despite its display before millions of visitors and scrutiny by generations of researchers.
The winged animal from the most famous fossil in the world had its eggs and babies hiding in plain sight as explained not only to specialists but also to the general public in The Rediscovery of Archaeopteryx, a book series in six volumes.
Archaeopteryx became the icon of the theory of evolution for featuring an animal thought to represent a transitional stage that preceded the appearance of today’s birds.
An investigation into the disruptive hypothesis that its fossilized pose corresponds to a nesting posture, rather than being the carcass of an animal that sunk into the bottom of a Jurassic lagoon, is described in this book series written by M. Jorge Guimarães, founder of ALERT, following research work conducted since 2014.
Non-rigid eggs from different Archaeopteryx specimens are described in Volume I and their hatchlings are described in Volume II. Some hatchlings died while hatching from their eggs and others in clinging poses with surface morphology preservation from head to tail.
Both volumes were just launched in book format. These discoveries transform biology and our understanding of evolution.
These books are available from Amazon and also here at the ALERT online store.
Porto, 2 July 2018 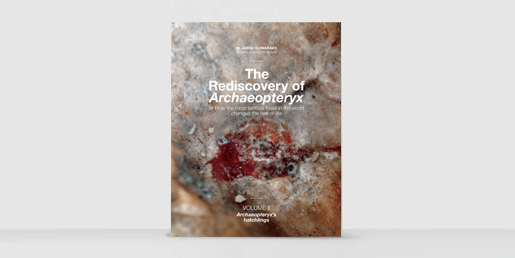